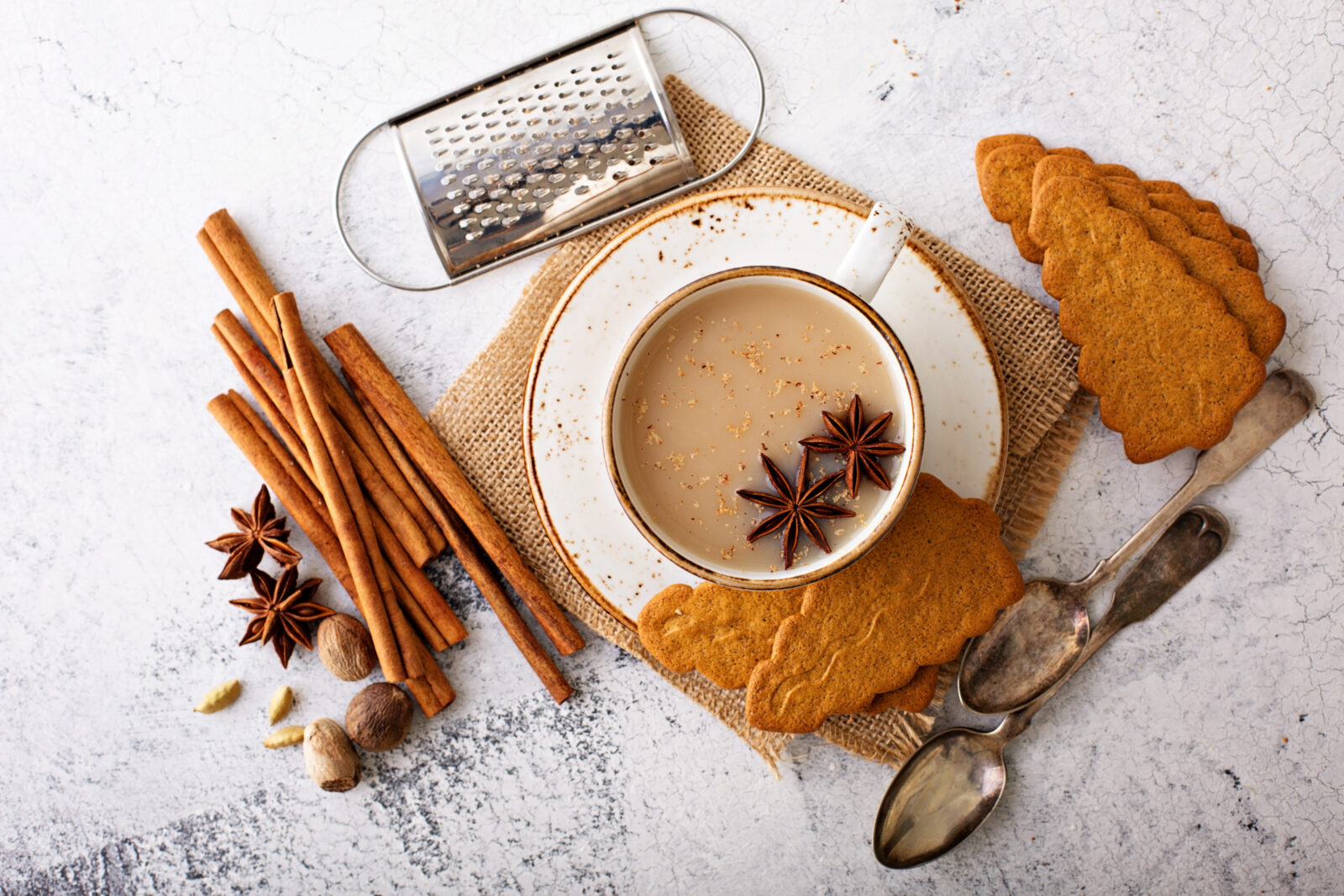 Get Your Chai On For National Chai Day!

It’s a chai kind of day here in Colorado, don’t you think? High temperatures dipping back into the low 70s, cloud cover, sudden flirtation with long-sleeved garments hanging in the closet. In fact, as we march through September it grows increasingly chai-happy, not just for the seasonal shift in weather, but also because on September 21, less than a week from today, it’s National Chai Day. Time to get your chai going!

The beverage is a relative newcomer to the world of tea. While people in China have been sipping Camellia sinensis for thousands of years, it didn’t make much of an appearance in India until the 19th century, when British merchants, who loved drinking green tea, introduced it widely across the subcontinent.

Meanwhile, people in India had been sipping drinks based on Ayurvedic principles for thousands of years. The tonics contained spices, herbs, roots and other botanicals. Once tea became popular in India, people tried to figure out ways to stretch it — tea was expensive. So they started spiking it with the ingredients they already used in their Ayurvedic beverages, and further mitigated the use of pricey tea leaves in their drinks by adding copious amounts of milk, along with sweeteners. The drink eventually turned into what we now think of as chai. In India, chai simply means tea. Its name is born out of the Chinese word for tea — cha.

We are chai champions. The unique beverage offers a huge variety of flavors — in India, different regions and even villages stick to their own unique recipes of botanicals and tea leaves. At Ku Cha, we offer 10 chais, each of them crafted by us, and all but one (a decaffeinated chai) certified organic.

Some chais are especially helpful for digestion. Others aid with fighting inflammation. Due to their concentration of botanicals, all of them offer wellness benefits. One thing they all have in common? Deliciousness!

Chais are also versatile beyond the warm liquids we sip from mugs. Chai lattes? Yes. Chai smoothies? Indeed. Chai muffins and scones, pumpkin breads and brownies? Of course — even chai-brined pork tenderloin and chai-infused shrimp stir fry. Chai has got to be the most resourceful tea in the world.

When we decided to explore chai this week, our wealth of excellent chais frustrated: Which three should we promote?

The decision didn’t come easy, but we identified a trio offering different flavor profiles and benefits. Brew these beauties, and you’ll start smiling. And with at least one of them, you also might begin cooking.

Here’s a special chai that we love sipping but also find is especially well-suited for cooking. This beguiling elixir leans into vanilla, through its foundation of Madagascar vanilla black tea. The rest of the botanical suite is straightforward, and dwells at the center of baking across autumn and winter: cinnamon, allspice, ginger and nutmeg. Could it get any more classically American seasonal that that?

We use this for what we call autumn chai cookies. You can incorporate the chai — tea leaves and all — into all sorts of cookies: shortbread, sugar cookies, snickerdoodles and plenty more. Google will lead you toward myriad different combinations of chai tea and cookies. Happy baking! And pleasant sipping, too.

Where Autumn Chai revolves around a spice blend familiar to anybody who has spent an afternoon baking holiday cookies, Sunrise Chai diverges from that profile quite a bit, with additions of turmeric, cloves, cardamom, fennel and savory stalwarts black pepper and cayenne pepper. This is a spicy chai! The turmeric lends the brew an exotic, pungent flavor, but it also offers health benefits, such as anti-inflammation assistance, weight-loss advantages and skin vibrancy.

We love this chai for a morning jolt. The black tea provides welcome doses of caffeine, the baking spices enliven our mouths and the black pepper and cayenne pepper surprise and awaken us.

Sometimes we crave chai, but don’t want the caffeine. Decaffeinated chai is always an option, and we sell a wonderful blend. But we also embrace our Organic Rooibos Chai, which turns to the South African shrub roooibos for its backbone, and leverages cinnamon, ginger, anise, black pepper, cardamom and bay leaves for the chai seasonings.

Rooibos adds an earthy touch to this bespoke blend, which we appreciate quite a bit; the botanical helps cultivate a unique chai, one electric with chai spices but also infused with rooibos’s novel flavors. Another rooibos benefit is electrolytes. They populate the plant. Among other things, electrolytes fight inflammation-precipitating and cell-damaging free radicals. With their prosperity of minerals, electrolytes also serve as fabulous thirst quenchers.